Another member of Racing Victoria's (RV) Apprentice Jockey Training Program will take to the track this weekend with Jaden Lloyd securing his first race ride.

The 17-year-old will make his debut in the saddle on Saturday, 17 August at Wangaratta when he rides the Hayes, Hayes and Dabernig-trained Fortyfivedegrees in the opening contest.

“David and the team at Lindsay Park, where I’m apprenticed, singled out this horse that they wanted me to ride,” said Jaden.

“She ran pretty well in her first start, so it’s got a chance on Saturday and with a bit of luck you never know what can happen,” Lloyd said.

Jaden was always destined to have a career in racing, being the son of champion hoop Jeff Lloyd. Jeff was a star jockey who won the Brisbane Jockeys Premiership for a third time last season (2018-19) before retiring in May.

Jeff amassed a total of 17 jockey premierships throughout a career which started in South Africa and included stints in Hong Kong, Mauritius, Brisbane and Sydney, winning more than 5,500 races and almost 100 at Group 1 level. 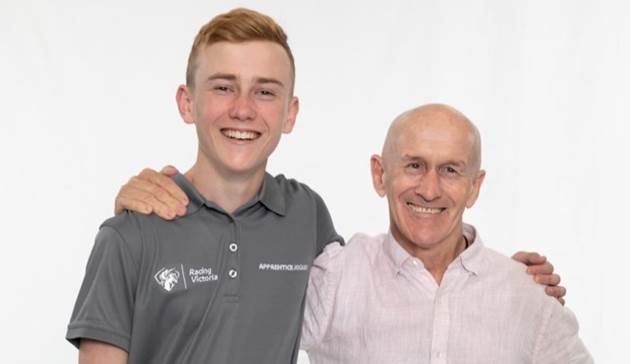 “Dad’s a great mentor, he watches all my trials to see areas I can improve on and things I’m doing well, he’s been a great support,” Lloyd said.

“I actually thought growing up that I was going to get too big, so at the time I wanted to become a trainer, but when I hit about 15, I wasn’t that big, so I thought I’d give this jockey thing a go.”

Jaden will have a strong support crew in Wangaratta with father Jeff, along with his mother Nicola, brother and sister, grandma and various friends all making the trip to cheer him home.

Having recently retired as a jockey, Jeff now has extra time to mentor his son and pass on his riding wisdom.

“Both my boys were keen in following my racing when they were younger. Jaden always followed form really well, so I’m glad he’s stayed in the game,” said Jeff.

“He’s new to the sport so at this stage it’s imperative that he listens to his bosses, that’s the first most important thing.

“Obviously wherever I can help I will do so.”

When asked what advice he will give to Jaden before he hops aboard, Jeff put it simply, “just enjoy it.”

“He must listen and try to ride to instructions, the main aim is to try and ride the horse how the trainers would like him to,” said Jeff.

“He’s riding a horse that’s inexperienced, only having one start, so it’s not a straightforward first ride but I just hope that he enjoys it.

“It’s a big occasion and we will all be there to support him.”

“I love the program, once a month we get to come down to Racing Victoria and it’s always a lot of fun. You get to see all your mates so it’s great,” he said.

“I’m also lucky as the Lindsay Park team have been extremely good to me since I’ve been with them. I couldn’t be happier.

“I’ve got a few more rides lined up so I’ll get this one under my belt, see how I go, and hopefully keep the ball rolling.”

Saturday’s Wangaratta meeting will also be a momentous occasion for Japanese apprentice Akatsuki Tomita who will ride for the first time on Australian soil.

In 2018, Akatsuki rode alongside Victorian Apprentice Michael Poy when he represented Japan in the Longines Future Racing Stars in Chantilly, France.

He has commenced a loan period with Ellerton and Zahra to further develop his riding experience, following a successful stint by Japanese Apprentice Ryusei Sakai in Victoria in 2017.

Tomita will make his Australian debut in race five aboard Darmasun.