Thursday’s six-race, $1.05 million Dubai World Cup Carnival card at Meydan Racecourse is highlighted by the Group 2 $250,000 Cape Verdi, a 1600m filly and mare grass affair named after Godolphin’s champion and 1000 Guineas (G1) winner. Thursday also features the inaugural running of the $175,000 Zabeel Turf (Listed), as well as a stellar 1600m dirt handicap with a global field, a 1600m turf handicap attracting Group 1 winners and a pair of sprint handicaps that may have Dubai World Cup night implications. The entirety of the evening is sponsored by pillar partner Azizi Developments.

Won by such standouts as Sun Classique, Sajjhaa and stakes record-setting Certify (1:36.09), the Cape Verdi offers fillies and mares a first opportunity to compete together at Meydan in Group company. This year it features a wide-open global field, topped on ratings by Ireland’s Surrounding (105), who hails from the yard of 2014 Dubai Gold Cup-winning conditioner Mick Halford. A Group 3-winning 7-year-old mare, she enters in good form, having won in Listed company last out over a mile of Dundalk’s all-weather and has faced the likes of I Can Fly and Space Traveller in the previous season. Regular rider Ronan Whelan will be on board when the Irish-bred daughter of Lilbourne Lad breaks from post six of eight competitors.

Godolphin will be well-represented with a trio of live shots, including a pair from the Charlie Appleby yard. Group 2 winner Beyond Reason will get plenty of support, as she has kept super company in her class lines, including G1 winners Billesdon Brook, Iridessa and Skitter Scatter. William Buick (post seven) chooses her over blue-blooded yard-mate Magic Lily, who has been on the comeback trail since a 721-day break that took her from a G1-placed juvenile to a 5-year-old mare with only four starts. A daughter of dual Oaks winner Dancing Rain, she makes her third start since making her comeback and will have James Doyle in the irons.

Saeed bin Suroor enters another with only four starts, 4-year-old Dubai Blue, who was last seen winning a Lingfield handicap over fellow Cape Verdi runner Hateya, who represents Great Britain in the race. Dubai Blue will try to put together two consecutive winning efforts for the first time when Christophe Soumillon rides from the outside post.

Jim Boyle-trained Hateya is one of two UK representatives, along with Simon Crisford-conditioned Maamora. While Hateya is a hard-knocking handicap mare who airs on consistency, Maamora is a lightly raced 4-year-old who still could be a bit unexposed from a talent perspective. Last out, Maamora bested Hateya by a half-length when they were second and third in the Lanwades Stud Stakes (Listed) at Bro Park in Sweden. Hateya breaks from the rail under Pat Cosgrave and Maamora from post five under Mickael Barzalona.

The octet is competed by France’s Nisreen and Turkey’s Peri Lina. Nisreen carries the silks of Team Valor International for trainer Hiroo Shimizu, who took over for retired John Hammond. The 6-year-old mare has four wins from seven starts and steps up markedly from a pair of conditions victories. Peri Lina is a four-time G1 winner and national hero in her native country, but was fifth in this race last year astern Poetic Charm and must improve when she breaks from post four under Selim Kaya. 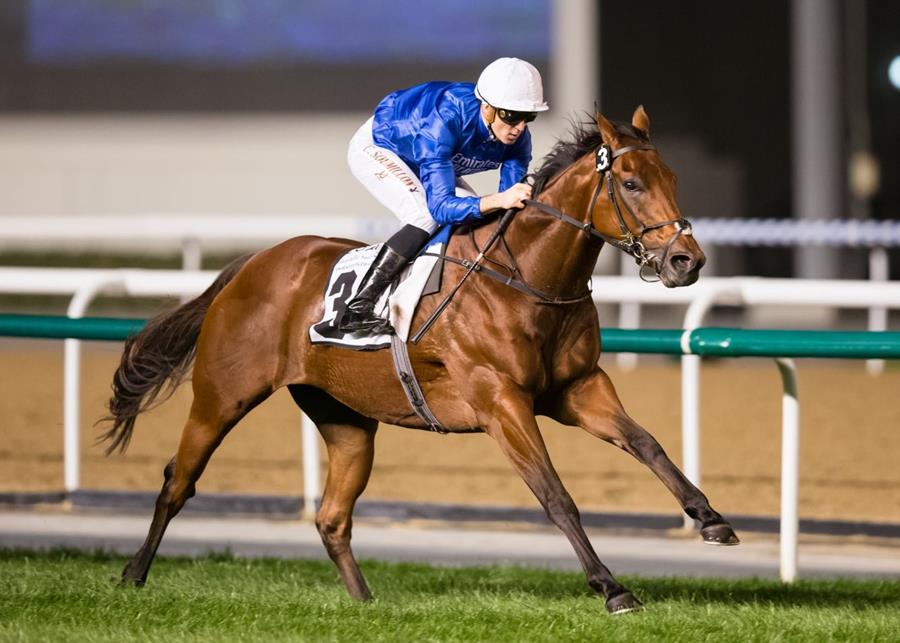 Before the Zabeel Turf earned its place into inauguration as a black-type affair, it was an undercard handicap won impressively last year by Godolphin’s Charlie Appleby-trained First Nation. This year, with the stakes literally higher, the field has thus amplified in class, with Jebel Hatta (G1) winner Dream Castle serving as the likely favourite. The son of Frankel looks to return to form for Godolphin and Saeed bin Suroor after four consecutive off-the-board finishes in top company. Two of those occurred in October in Australia, so it can be assumed that a return to familiar grounds in Dubai are just what the proverbial doctor ordered for the 112-rated star. Still, when Christophe Soumillon (post two) takes the reins again, he will get a stiff challenge from the aforementioned First Nation, who will be ridden by James Doyle. Unlike Dream Castle, the son of Dubawi has proven to love the 2000m trip and must be respected in this spot.

Appleby’s top rider William Buick chose to ride Group 2 winner Loxley, who must overcome a stinging case of seconditis, including a tough loss to Bin Suroor-trained Mountain Hunter on Sept. 27 at Newmarket and last out to Pablo Escobarr. Long well-regarded, the son of New Approach may appreciate any possible cut in the ground caused by recent rains, as he won the 2018 Grand Prix de Deauville (G2) on soft ground. The four-time winner breaks from the outside post 10, but will have 1000m until the first bend to find his comfort zone.
Irish 4-year-old gelding Simsir will carry the famed silks of HH Aga Khan and makes only his fourth start, only one finishing worse than second and raced all three times at the 2000m trip. Trainer Mick Halford is well-capable when shipping horses to Dubai and the Irish-bred son of Zoffany gets in at a light 53kgs. Tadhg O’Shea rides from post six.

The UK will be represented by Certain Lad (Ben Curtis, post five), from the yard of Mick Channon, as well as Jamie Osborne-trained Big Country (Richard Mullen, post 11). Both must up their games in this spot, but a big effort from either would not be a huge surprise.

Locally based Astronomer must return to form for Mike de Kock to factor when he breaks from the rail under Sam Hitchcott and a feathery 53kgs, while Famous Wolf (Connor Beasley, post eight) wheels back on one week after being politely thrashed by superstar Benbatl in the Singspiel (G2).

A full field of 16 will get ready to rock the boat in the Aliyah on Thursday, a salty 1600m handicap nightcap topped by G1 winners Suedois and Royal Marine. While Suedois, based in the UK with David O’Meara, wheels back on two weeks’ rest off a decent third in the Meydan Challenge (Listed) over 1400m, Godolphin’s Saeed bin Suroor-trained Royal Marine has not been seen since being unplaced in a trio of G1 sophomore affairs last spring and summer. Suedois carries top weight under the conditions of 60kgs, once again, while Royal Marine is at 57kgs.

Royal Ascot winner Settle for Bay, from the David Marnane yard of Ireland, is more than capable of mixing it up with the top lot on his best day, but must return to the form that saw him land the Royal Hunt Cup of 2018. Pat Dobbs picks up the mount with a good post of seven.

A pair of Simon Crisford trainees making their first start for the conditioner catch the eye. Epic Hero, previously with Andre Fabre, stretches out to the distance at which his sole win came. Still, the lightly raced 4-year-old son of Siyouni has impressed at morning track work and had ample time to adjust. The same can be said for former Gosden trainee Stylehunter, who will be ridden by Ryan Powell. A respectable performer at the past two Royal Ascot meetings, including a fourth (beaten 2¼ lengths) in last year’s Royal Hunt Cup, he is winless since an 1800m Goodwood handicap win in August 2018.

HH Sheikh Hamdan bin Rashid Al Maktoum has entered five in this, with his best appearing to be Mussabeh Al Mheiri-trained Zainhom, who was a find second on opening night two weeks ago in the Meydan Challenge, bringing back memories of the spark he showed early in his career when chasing home Barney Roy, Best Solution and Beat the Bank.

Dirt milers from around the world with Godolphin Mile aspirations line up over 1600m, topped by the Doug Watson pair of Midnight Sands, a highly regarded type stretching out in trip, and Thegreatcollection, who was scratched from the G2 Al Maktoum Challenge R1 last week. The latter must tote top weight of 60kgs, while taking on the likes of 2018 Al Bastakiya (Listed) winner Yulong Warrior, South Korea’s well-regarded duo of Today and Baengmunbaekdap, Swedish pair Red Hot Chili and Plata O Plomo and UK invaders Ambassadorial and Assimilation.

One to watch in here may be Phoenix Ladies’ Superior, who makes his first start since finishing eighth in the UAE Derby (G2). Second in the 2019 Al Bastakiya (Listed), he has a win around one turn at Meydan on debut.

Aforementioned Ambassadorial, trained by Jane Chapple-Hyam, makes his first start since finishing ninth in the Breeders’ Cup Dirt Mile (G1) at Santa Anita. The world-traveling 6-year-old son of Elusive Quality looks to return to the form that saw him finish third in the Korea Cup in Seoul two starts prior. Baengmunbaekdap was seventh in that 1800m affair.

American form will be on display with Phoenix Thoroughbreds’ Captain Von Trapp, who makes his UAE bow for Salem bin Ghadayer. He was previously trained by Steve Asmussen, for whom he finished fourth in the Pat Day Mile (G3) behind Mr. Money and sixth in the Rebel Stakes (G2) astern Omaha Beach.

Nine Below Zero tops the ratings and runs for the third time in as many weeks for trainer Fawzi Nass. Fitness will likely not be a question time for the son of Showcasing, but company is strong in the 11-horse field, including Macao star Fasuba, 2018 Al Shindagha Sprint (G3) winner My Catch, speedy Satish Seemar trainee Bochart and his yard-mate, G3-placed Behavioral Bias. A pair of x-factors come into play in Ed Walker-trained Desert Doctor who makes his dirt debut for owner Mrs. Fitriani Hay, as well as Godolphin’s Charlie Appleby-conditioned Tribal Quest, who does the same. The latter, out of an American G3 winner on dirt, supplies plenty of intrigue, while the former is an all-weather aficionado in his homeland.

The evening kicks off with a blitz down the 1200m turf chute. A full field of 16 is set to race and the rail set out at eight metres. Riflescope appears the horse to beat, as he adores this track and trip and has drawn well (10), but in-form Almanaara made a statement two weeks ago for HH Sheikh Hamdan bin Rashid Al Maktoum and Red Stables that a switch of surface was just what he needed. Saeed bin Suroor-trained pair of Yattwee and Moment of Silence must be respected as serious players, with Christophe Soumillon choosing the former. UK sprinters Dream Today and Summerghand, Sweden’s Es Raco and Spain’s Blueberry all back up on short rest hoping to improve in this spot.