Thursday’s third meeting of the 2020 Dubai World Cup Carnival at Meydan Racecourse, which was sponsored by Azizi Developments, was highlighted by the Group 2 $250,000 Cape Verdi, a 1600m turf feature for fillies and mares, as well as the $175,000 Zabeel Turf (Listed).

The Cape Verdi was won in thrilling fashion by Godolphin’s blue-blooded Magic Lily, a daughter of classic winners New Approach and Dancing Rain, who produced to lead right on the line by James Doyle for trainer Charlie Appleby. It was a third win in the race for both trainer and jockey and produced a stakes and track record-setting time of 1:34.84. Second by a nose was a game Nisreen, who shipped in for Team Valor International from France and was piloted beautifully between by Pierre-Charles Boudot. Beyond Reason, with William Buick up for the winner’s connections, was third, 2½ lengths astern the top pair.

Victorious on her juvenile debut, she was then third in the Group 1 Fillies’ Mile behind Laurens and September, while finishing ahead of Magical. Laurens would go on to win six Group 1s, September finished third in the Breeders’ Cup Juvenile Fillies Turf (G1) one race later and Magical became one of the world’s top middle-distance horses. Magic Lily then missed her entire sophomore and most of her 4-year-old season with injury. She returned with a second in Listed company in France in the autumn before a poor performance last out after a bad barrier draw in Listed Lingfield company.

“I had my head down to ride and didn’t think we’d got up (to win), but she’s tough and very game,” Doyle said. “It didn’t go entirely our way. The plan was to lead or if not be very close, which is what happened. When (Dubai Blue) went by me (on the backstretch), it sort of set her alight. She was over-racing a little bit. She’ll definitely be better going another furlong. We think she's a nine or ten-furlong filly.” She’s a filly we have always liked, with a lovely pedigree and plenty of ability. Hopefully we can build on this, as she has very few miles on the clock.”

“She ran very well,” Boudot said. “The pace was very strong and the way was open just at the turn and she came in really easy. She was very courageous.”

Buick added: “She ran well. She would be better back to seven furlongs.” 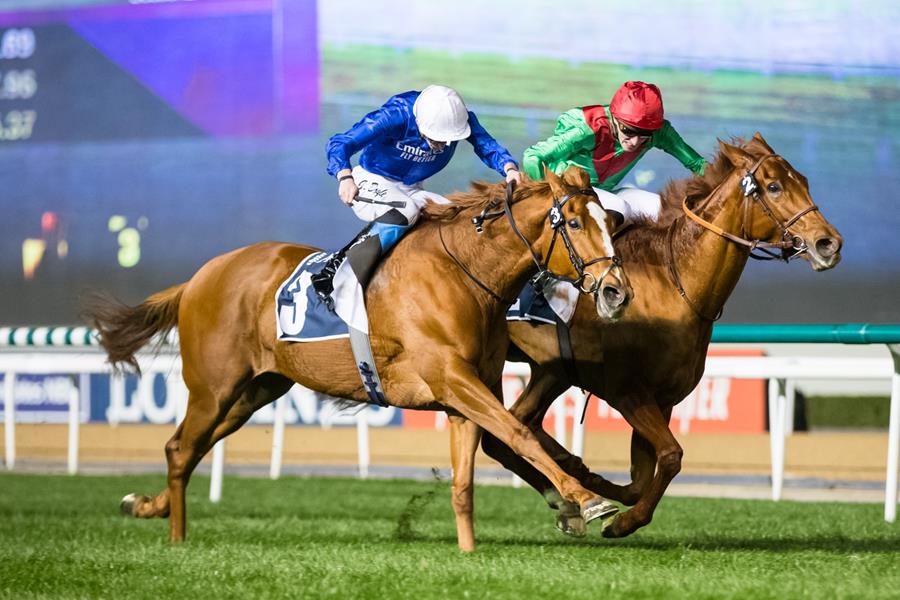 The secondary feature of the evening was the Zabeel Turf, which was won in driving fashion by Mick Channon trainee Certain Lad, who was ridden by Ben Curtis for owner C. R. Hirst, who was in town for the race. A 2000m turf handicap and main support race was expected to be dominated by Godolphin, responsible for six of the 11 runners, but they were brushed aside by the winner, as well as HH Aga Khan-owned runner-up Simsir (Tadhg O’Shea aboard), trained by Mick Halford. Godolphin’s Desert Fire was the best of the blue in third, while G1 winner Dream Castle managed only seventh and G2 winner Loxley was 10th.

Fractious in the preliminaries and sent to post early as a result, the 4-year-old Clodovil-sired winner was settled well off the pace by Curtis before making stealthy progress throughout the early part of the straight, then quickening clear passing the 200m pole. Simsir was gaining at the line, but never looked like denying Curtis his 21st winner in the past 14 days. Certain Lad equalling the track record when finishing three-quarters of a length clear.

“He’s improving with every run. It’s unbelievable,” Curtis said. “The way he travelled today was even better. He’s a handful, but it’s probably good thing, because if he wasn’t a handful, they probably wouldn’t have flown me out to ride him. He does everything a horse should do to get himself beat, but he keeps winning. In the prelims he gets very warm and is notorious for it. He gets hot and sweaty, but it doesn’t seem to bother him in the race. He ran a bit fresh and keen the first two furlongs, but once he got into a rhythm, I was delighted. He picked them up well and kept going all the way to the line. It was a good performance. He ran a good race and the time backed it up.”

“He has always been a good horse, he was in good form and we had the (nerve) to go and it worked out,” Channon said. “We've always thought a lot of him. He won a Listed race as a 2-year-old and was consistent last year. It's hard to place these horse, but we knew we could be competitive tonight. You never know going against Godolphin. We've always been competitive and never slow at having a crack (at big races). That's why we have race horses. We’ll have a go at the best if we can and go on to the next race (at Meydan).”

Hirst added: “It’s really fantastic. We’re over the moon. We didn’t expect him to run so well in his first race. Obviously, he hasn’t run for a few months. We bought him back in the Newmarket sales because we didn’t think we got value and the plan was to send him down here with (assistant trainer) Jack Channon and obviously what can we say. Great ride by Ben. We really appreciate that he came out here to ride for us. Couldn’t have ridden a better race. We’ve won this now, but the main target was a race here on the 30th, but we’ll have to look at that now. I’d just like to say thank you to all the team who takes care of him at home to get him in this kind of condition to get him here.”

The opening $135,000 Riviera 2, a 1200m turf handicap, attracted the maximum field allowed of 16 and the runners soon split into two groups of eight and at halfway it was apparent those drawn high and racing nearest the standside rail were well on top. Pocket Dynamo and Geological led that nearside group a merry dance until with about 450m remaining James Doyle produced Roulston Scar to challenge, the pair quickening clear and soon in total control to win by 1 ¼ lengths. Dream Today and Moment of Silence chased on for minor awards.

A 4-year-old gelded son of Lope De Vega, the winner was making his local debut and first start for trainer Simon Crisford and owner Abdullah Menahi, having been purchased out of Kevin Ryan’s yard at Tattersalls in October after having won three of his ten starts in Britain.

Assistant trainer, Edward Crisford said: “He is a nice new horse for us and has been straightforward to deal with and train. I would imagine we will aim at another 1200m turf handicap and hopefully we can have some more fun with this horse.”

Dirt sprinters had their chance in the next race, a 1200m dirt handicap, the $135,000 Al Furjan Handicap, which was contested at a furious gallop with at least four of the 11 runners wanting to lead but it was Bochart and Richie Mullen, well-berthed in stall four, who was soon in front and once kicked clear early in the straight they were never going to be caught. The tough sprinter dominated from start to finish and nearly broke the track record in the process, finishing up in 1:10.18—just .06 off Mind Your Biscuits’ 2018 mark.

“He is such a tough, honest horse and it has been well documented we nearly lost him after he injured himself in the horsebox a couple of years ago,” Mullen said. “His great attitude makes my life a lot easier and he seems to be improving with age. He is now a Carnival winner which is a great result for everyone concerned.”

The Mina, a $135,000 1600m dirt handicap, was another to produce an exciting finish with Pat Dobbs and Midnight Sands leading close home to provide Doug Watson a 600th career winner, denying British challenger Ambassadorial who had appeared to have opened up a telling advantage when committed for home by John Egan leaving the home turn. A 4-year-old Speightstown colt owned by The Cool Silk Partnership, he was winning for the third time this season and fourth time in a row having lost his maiden tag in March. That was over 1200m with both previous wins this season over 1400m and this was his first attempt at 1600m.

Watson said: “Credit to the owners because they let me put him away after he won his maiden with this season in mind and they have been rewarded. The runner-up looked to have opened up a decent lead and, half a furlong out, I was not sure we would get there but this horse has a great attitude and battles hard. We will have to see what the handicapper does now before we make plans but he is a nice horse and Pat gets on well with him.”

The concluding 1600m turf handicap, the $135,000 Aliyah, produced a one-in-a-million finish when David O’Meara-conditioned G1 winner Suedois fought to the wire to win by the scantest of noses over Crisford-trained Epic Hero. The winner was carrying 5kgs more than his rival and ran in this mile affair in lieu of next week’s Al Fahidi Fort (G2), which is at his beloved 1400m trip. The 9-year-old stable star won for the 10th time from 49 starts for owners George Turner and Clipper Logistics. Danny Tudhope, coming off a stellar 2019 season, was in the irons.

“He’s a fantastic horse, a Grade 1 winner and has won a load of prize money,” O’Meara said. “We’re delighted. I wasn’t sure we won it when he cross the finish, but he ran a great race. I did think about running in the Group 2, but thought it would be a tougher race and he is well up to running in a handicap. He gave a lot of weight away, but good horses like him who have won a Grade 1, then can give weight away and still win. After here, we could look at the Zabeel Mile (G2).”

The fourth DWC Carnival evening will take place on Thursday, Jan. 23, with a 6:30 p.m. post time. Live racing returns in two days with a domestic Racing at Meydan meeting on Saturday, Jan. 18. First post is 5:30 p.m.