A familiar name to UAE racing fans from the 2017-2018 season will be returning on Dec. 19 in the form of 2018 Al Bastakiya (Listed) winner Yulong Warrior, who makes his first start for Zabeel Racing Stables master Satish Seemar since finishing seventh in the UAE Derby (G2) astern Mendelssohn.

Owned by Yuesheng Zhang’s Yulong Investments, a worldwide racing and breeding operation based in Victoria, Australia, the son of Street Cry has not raced since finishing seventh to G1 winner Gift Box in the San Antonio (G2) at Santa Anita on Dec. 26 (2018). Said effort was part of a four-race USA tenure under the tutelage of trainer Doug O’Neill—the highlight of which was a second stakes win in Emerald Downs’ Getaway Day Stakes. Previous to his Stateside campaign, he raced four times in the UAE for Seemar, including two wins, and four times in Ireland for Mick Halford, resulting in as many placings. He returns to racing in Dubai after 10 months of reacclimatising to the area.

After a quartet of respective starts on a trio of continents, the $180,000 Keeneland September 2017 and $460,000 Goffs London 2017 graduate makes his return over the course and distance at which he broke his maiden. He currently carries a 98 rating.

“He looks good,” said Bhupat Seemar, assistant to Satish. “I think he probably wants a little farther than a mile, but this is a good place to start him. He looks a picture and this is where he performed the best, so it’s good to get him back."

A familiar face to the Meydan faithful, the 6-year-old son of Exceed and Excel was sixth in last season’s Dubai Creek Mile before going on to win the Jebel Ali Mile (G3) two starts later. He was also 10th in in the 2018 Godolphin Mile for in-form owner Nasir Askar.

“They’re both doing really well and hopefully will keep doing well to the race,” Seemar continued. “Secret Ambition is a good, solid performer who has run in the Godolphin Mile a couple times—fifth last year—he’s just never been very lucky in the gate draws. He’s ready to roll. Sometimes, in his first run, he can throw in the towel, but he’s healthy and looks very well.” 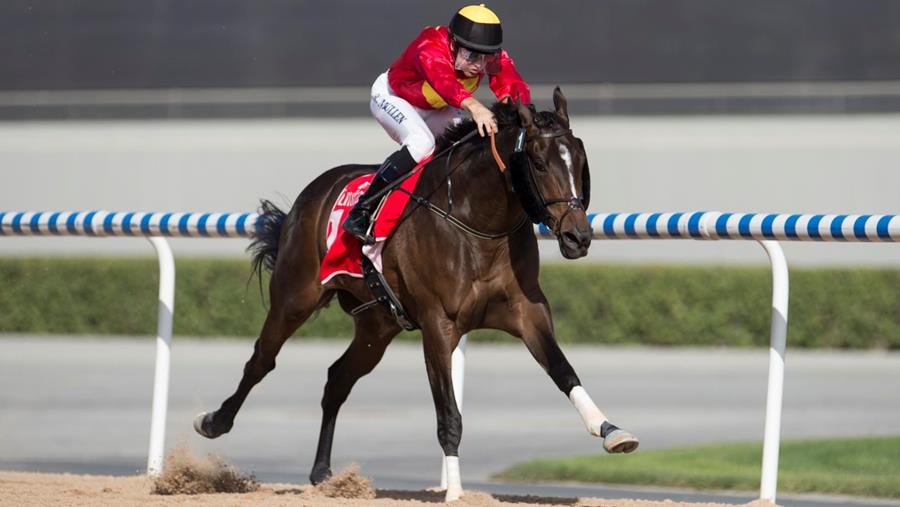 One of the top milers in the UAE will return in the Dubai Creek Mile (Listed) on Dec. 19 in the form of Sheikh Rashid bin Humaid Al Nuaimi’s Kimbear, who embarks on his 2019-2020 season in the 1600m affair. Trained by Doug Watson, the highly regarded Group 3-winning son of Temple City will look to improve upon a season that did not quite live up to expectations, while not being without merit.
“He’s doing great,” Watson said. “I almost wanted to run him Thursday night in the Garhoud Sprint, he’s doing that well. We ran (third) in that last year. His last work was exceptional. He’s going into the race great.

“He had some foot issues and we couldn’t quite get it right last season,” he continued. “That extra time with the foot was really good for the horse and he’s doing pretty well right now. We’re hoping for a better year than we had last year with him.”

A winner of Super Saturday’s Group 3 Burj Najaar in 2018, the compact dark bay with a spunky attitude appears primed to improve upon the form that saw him finish fourth and sixth in the last two editions of the $1.5 million Godolphin Mile (G2), as well as a respectable sixth in the 2017 Santa Anita Derby (G1) and second in the Lazaro Barrera (G3)—the last two when trained Stateside by Eric Kruljac. Overall, Kimbear has three wins and has finished in the money in 13 of 19 lifetime starts. Last season, he was also second in the Al Maktoum Challenge Round 1 (G2) to North America and fourth in the Firebreak (G3) to stablemate Muntazah.

CHIEFDOM RISING IN RANK; MEYDAN NEXT

He is not yet a household name on the UAE flat racing scene, but Sheikh Hasher bin Mohammed Al Maktoum’s Salem bin Ghadayer-trained Chiefdom may make short work of that if his impressive form continues. A good-looking grey son of ace sprinter The Factor, he has proven a force in two consecutive 1600m races at Jebel Ali this season. The high-energy charge won a maiden by 8½ lengths over well-regarded Doug Watson trainee Dark Thunder on Nov. 15 and then easily smashed handicap foes by 6½ lengths 14 days later under Royston Ffrench.

Left in his wake that day were six horses rated 85 or above, hoisting his official rating a massive 12 pounds to 87 and putting him on the brink of the Dubai World Cup Carnival’s 90 minimum. The inspired new form came after a 224-day layoff after two unsuccessful races at Meydan over 1900m and 2000m. The 4-year-old raced once in England for trainer John Gosden as a juvenile in 2018, finishing seventh of 10 at Nottingham, and was subsequently gelded and sold.

“He’s a good horse,” Bin Ghadayer said. “We got him at the sale and we worked against time in the beginning, working too hard to break his maiden and it was mistake from us. Over the summer, he just started to acclimatise and started to show his ability.

“He is a nervous horse and you must take care of him and try not to annoy him,” Bin Ghadayer continued. “We try to give him what he wants and make him happy. He’s a good horse and has shown that in just these two races.”

Originally a $300,000 Keeneland September 2017 yearling, he is a blueblood son of Sultana, a daughter of Storm Cat and full-sister to Shadwell Stud’s champion 2-year-old of 1998, Aljabr, who won G1 affairs for three consecutive seasons, including the Sussex (G1) and Lockinge (G1) at three and four. Next will likely be a return to Meydan on Dec. 19 over the same 1600m distance as his first two runs this season—a race that could put him in position to be a major player in the DWC Carnival.

“We won’t put pressure on him—just go step-by-step,” Bin Ghadayer concluded. “He’s not so far from a Carnival horse, but he must improve, so we will see. I think he will probably run on the 19th in the mile handicap. He has options and we need one more race. I know he’s good and it’s not the quality I am concerned about, it’s his mind.”